to hear the angels sing

one of the roles i cherish as a mother is the one of rescuer.   we
can't always help our little ones, but when we can, it just doesn't
get any better than than that . . . 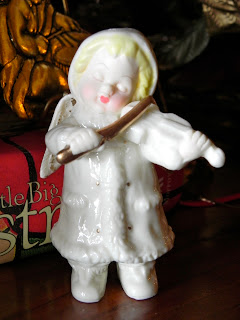 "well, "  she said cheerily one afternoon to david, her eight year
old, and two of his friends, "what Christmas songs are you
learning this year?"

looking down at his feet, david answered sadly, "teacher says
we can't sing good enough.  she's only going to let the kids sing
who can carry a tune."

inwardly she broke in a mother's rage.  "so that's what she says,
does she?"

she drew in a deep breath, "well how'd you like to practice your
song with me?  what song is your class to sing?"

"it came upon the midnight clear!",  all three boys, speaking at
once.  she played and sang the first two lines, and they opened
their mouths and sang out lustily.

at the end of the phrase, david's mother stopped abruptly;  her
feelings about the teacher made a right-about turn.

she lifted her head and smiled.  "i tell you what, the way, really,
to learn a tune is just one note after another.  i'll play just the
two first notes on the piano--'it came'--."  full of good will, the
little boys sang with her.

she stopped.  breathed hard.  "i think we better take it one note
at a time."

during the weeks before Christmas, the mother invented games to
teach the boys to hear whether a note was higher or lower,  'up
hill and down hill.'  little by little the boys began to sing the same
notes that she played.

when all three boys sang, "the world in solemn stillness lay-- to
hear the angels sing . . ." with the rest of the class, the mother
enjoyed the soul satisfying pleasure of a sweet reward.

walking home on a cloudless, still night, david lifted his face
towards the stars.  "it's so still." he said in a hushed voice, a
voice she had never heard before.

"all those stars, they shine so bright.  but, they don't make a
sound."

then he looked into his mother's face, "do you remember in the
song, 'the world in solemn stillness lay'?"

the starlight showed his clear, honest, little boy eyes wide and
fixed on his mother's, and in them she saw a miracle --- of an
awakening soul.

he had not known that he had an inner sanctuary.  now he stood
in it, awe-struck at his first sight of beauty, and opened the door
to his mother.

"i thought i heard them singing--sort of," he whispered.

(adapted from "the night the stars sang" by dorothy canfield
fisher)

"and suddenly there was with the angel, a multitude of the
heavenly host, praising God and saying, 'glory to God in the
highest and peace to men on whom His favor rests."
luke 2:14
written by myletterstoemily at 7:00 AM 37 comments: