blackberry cobbler saved by the gun!

now that it's blackberry season, i want to share my favorite blackberry

every july, my family hauled hay at our ranch -- ugh.   the heat.   the
heavy haybales!  the sickening fear while pulling hay out of the blades!!
the idea of inadvertently grabbing a snake instead!!!
the only redeeming part was my mom's delicious blackberry cobblers.
picking the berries, however, was also dangerous, as there were so many
snakes lurking in the bushes. 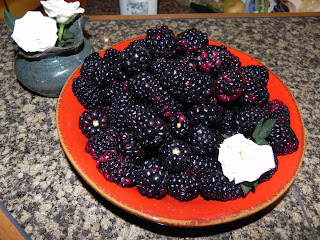 in fact, snakes were so prevalent that my dad let my 12 year old brother
carry a handgun to protect us.  that is probably his happiest childhood
memory . . . and my most horrifying.
"seriously, dad?  you're going to let that crazy little kid carry a gun? he
will kill us all!"
one sweltering morning, we were picking blackberries, when "boom!"
wyatt earp had fired his six shooter and nailed a rattlesnake, who was
considering a strike at my mom's ankle. 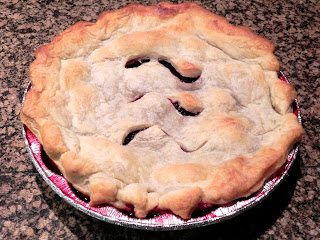 as i stared in horror at the dead snake, i thought, "we almost didn't
get that cobbler."
love,
lea
"bring forth fruit worthy of repentance."  luke 3:7,8
written by myletterstoemily at 11:18 AM 24 comments: