i think there should be an emotional rating for some movies.  take
"doubt", for instance.  that story was laced with so many disturbing
themes, it kept me up for nights.  (i slept like a baby after all the
"final destination" movies.) 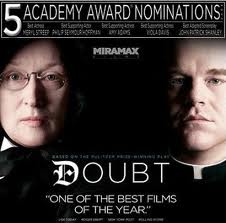 here's what ate at me the most.  though we were supposed to hate
the critical sister, she was probably correct with her suspicion that
the catholic priest was a pedophile.  my anguish stemmed from the
witch hunt after his charming and sympathetic character.

the dilemma increased when he displayed some arrogant and
condescending tendencies.  "wait!  i thought i was supposed to
like him!"  the judgmental sister was harsh and conniving, on one
hand, but surprisingly perceptive and sensitive, on the other.

oh, the twists and turns.

when  the poor mother was informed that her son was probably in
an unhealthy relationship with the catholic father,  she thought that
was better than getting a beating from his own father.

aaaaaaargh!  by the end of this movie, i felt as terrible as the old,
mean sister looked.

"therefore be as shrewd as snakes and as innocent as doves."
matthew 10:16b
written by myletterstoemily at 8:11 AM 33 comments: